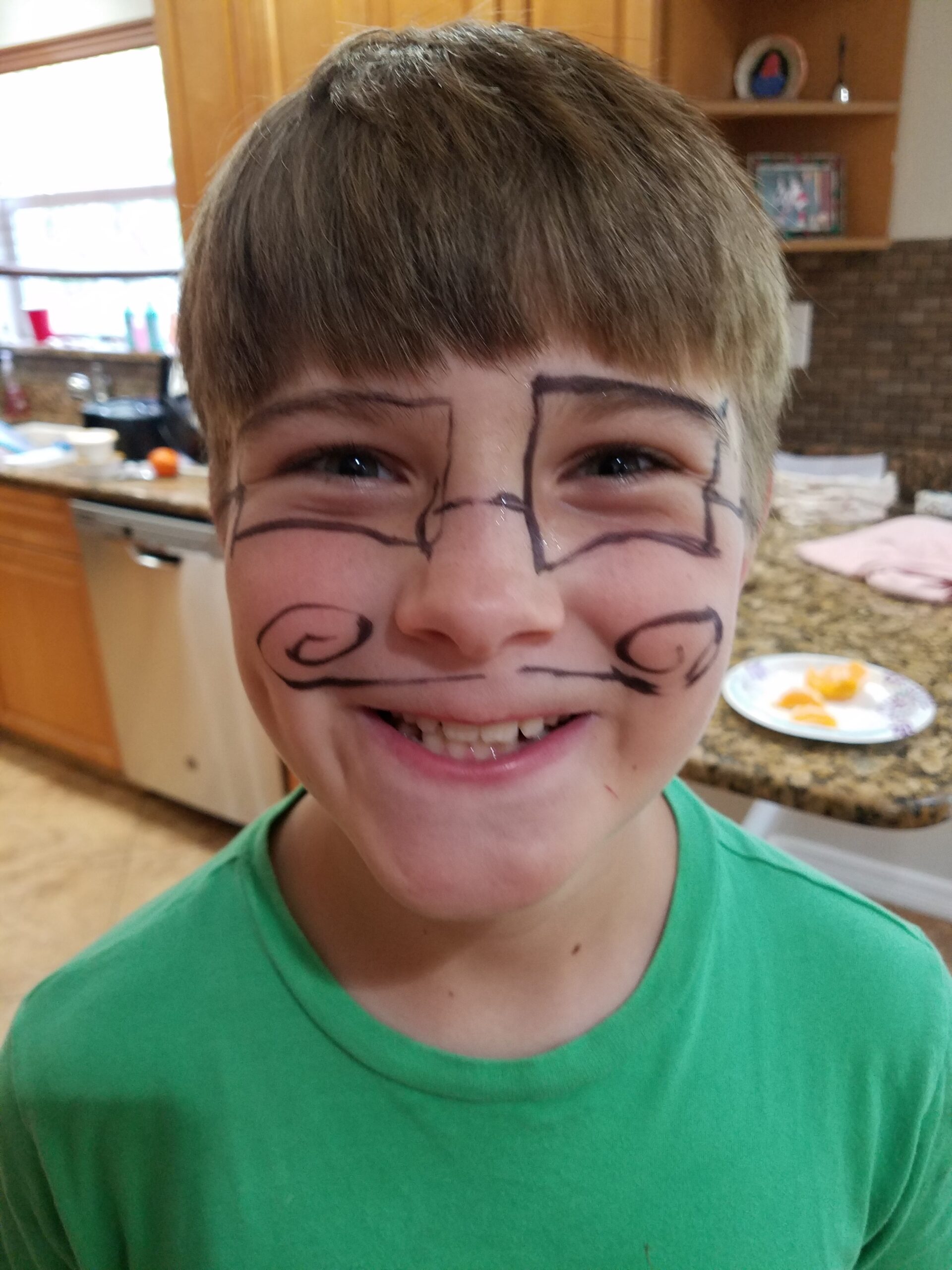 Today, I felt like a true-blue, 100% certified REAL homeschool Mom.

I can’t remember yelling AT ALL.  (Thank you, thank you!)

The schedule (that my brilliant husband suggested) worked wonders. I’ve included a photo of it below. Basically, we have five academic periods throughout the day. Each period is 45 minutes each. They either eat or do chores or play in between each period. I planned for them to work for four of the periods, and the fifth one is only required if someone needs extra time to complete an assignment. Or if something needs to be corrected. Or if I’m feeling mean.

Nobody had a potty accident today!  (Celebrate!!!)

Before today, we allowed the boys to choose where they did their work. They chose the place NEAREST to Mike and me. Mike is conducting juvenile court in our office, so they have to be super quiet. And I’m trying to work, so having them sit at the dining room table with their books was not conducive to anyone getting ANYTHING done. Not to mention, the temptation to fight.

I get it. They chose that location because they are kids and they really just want our attention, but they weren’t LEARNING, and that was the whole goal of this school thing at home. Otherwise, just give them an early summer break and call them back in July when and if this thing is over. (Please, God, let it be over by then)

But they are kids, and they almost NEVER know what’s best for them. Or maybe they KNOW but they don’t care. So, last night, we informed them that they could choose where in their rooms their desks were located, but they could not choose to work anywhere other than their desks for school. This worked like magic. It eliminated the day-long drama of arguing over who touched who, or who is the worst kid. It was a much more peaceful day.

Another concern of ours was that the children not become dependent on US to help them with their work. So, I created their assignments, place them in their folders and then set them off to work. I came into their rooms once each academic period to check on them and ensure that they were staying focused. The idea of free time after the work was enough to keep even my most inattentive child on task.

I also learned over the last few days that the work that the school is sending out is more like glorified busy work. This isn’t a criticism of the school system, they have to create material for ALL of the students. Not to mention, I am using the printed packets, not the more personalized (I assume) online instruction, so that’s another factor. But the kids were bored with the work I was giving them. So I stepped it up like FIVE notches today.  They were engaged, challenged, and they did some great work!

I also asked them what they liked and didn’t like about school verses homeschool. My oldest told me that he liked it when the history teacher has them take turns reading paragraphs out of the book. So for literature, we did that together today out of a sixth-grade literature book and it really worked out well. Both boys were able to verbalize their thoughts and practice some great critical thinking skills. They are learning to write complete sentences and use proper punctuation, but hey, I’m 46 and I’m still learning!

I had to double or triple their work from the days before to get to this point, but I’m amazed at what they can do. I definitely complement the school system, especially the teachers for all that they’ve done for my kids. I don’t think I was that intelligent in the fifth and sixth grades. Maybe not now, either.

On the Kasie front, I know she’s having a hard time not going out socially. I didn’t realize it was that important for her to be out and about. She moved into the dorms in the fall, and I just assumed when she wasn’t in class, she was in her room working hard. She’s always liked people, but she has also needed more time than other people do in order to decompress from a hard day. I guess I just inaccurately assumed she only needed us around her. She is mentioning more and more every day that she just wants to go somewhere in town. She also has specifically mentioned Dave and Busters. She wrote it on our chalk wall of places we would like to go when this pandemic has passed.

She enjoys being around her brothers though, and today, Daniel drew a pair of glasses and a mustache on himself just to get her to laugh. It worked. She laughed so hard, it vibrated the walls.  Those are good sounds, and they fill my heart.

The Kale canoe yielded carrots today.  I knew I planted carrots, and at first, I thought they failed in the canoe, because everything else I planted grew, but nothing else did. Then one day, I saw some green poking out from where I’d placed the seeds. I watched for weeks and the green leaves grew tall and bushy, but I figured there wouldn’t be any orange, crunchy goodness under the black soil.  Today when I was walking #thebookfarm, I decided to put my fingers down into the dirt and feel for them. I felt something hard and knobby.  Carrots!  I didn’t harvest them, I waited until the kids were done with their work, and brought them out to the canoe.  They pulled them out and celebrated with me!  My first crop of carrots!  I had been waiting for the crown to pop out of the soil like radishes do, but the carrots were so deep down, that probably would have never happened! There’s a metaphor there….something about hard work paying off, even when you can’t see it above ground. But I’m way too tired to verbalize it after a week of homeschooling.

The boys were so excited about the carrots that they celebrated by eating them up before anyone else could get to them. So now I have to grow more. Good thing I’m a professional homeschooler. I’ve already ordered 6 more bags of soil (to be delivered) and some bags to grow potatoes.  I love sharing my love of agriculture with them.  I feel like my Dad would be happy about that, too.

The day ended with a spirited Jenga tournament and Mike proved himself to be a Jenga Jedi Master. Now he’s the guy to beat, but that’s fine because we played Jenga for months at the beginning of our relationship. I know how to beat him. Hint: It’s all in the eyes. ?

Mike took the boys out to play badminton so I could write this blog post. That’s great because I’ve been staying up until 10 pm some nights to get it written and posted. It doesn’t sound late, but I wake up at 5:30 am so that I can work for a few hours before the natives come down the stairs.

I don’t have many more coherent thoughts left in my head today, but I’ve given a good 110% of myself to my children’s education today.  I’m pretty sure they’re Harvard bound and it’s all because of me. I’m going to pat myself on the back all the way up to my bathtub.